Koncept in režija/Concept and Directed by: Rabih Mroué

DANCE ON is an initiative by DIEHL+RITTER gUG funded by the German Federal Government Commissioner for Culture and the Media, co-funded by the Creative Europe programme of the European Union as part of DANCE ON PASS ON DREAM ON./ DANCE ON je nastal na pobudo organizacije DIEHL+RITTER, podprt je s strani Nemške zvezne vlade, Direktorata za kulturo in medije, sofinanciran s programom EU Kreativna Evropa, in je del programa DANCE ON PASS ON DREAM ON. 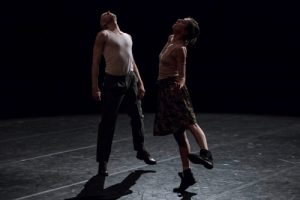 There is an essential connection between the work of the Lebanese artist Rabih Mroué and the international dance ensemble DANCE ON: they both focus on memory, its truth and the media in which it appears or is embodied. Even though Mroué considers memory to be of a historic nature, the narrative manner of confronting social, national and class differences has a certain connection with the orders of human bodies that the DANCE ON Ensemble, a collective of dancers that the contemporary dance and ballet cultural market decided to retire unconditionally, and thus eliminate them from the field of vision, public sphere and memory. Neither Rabih Mroué nor DANCE ON Ensemble agree to such actions with their work.

Rabih Mroué is a theatre and film director, playwright and scriptwriter as well as a visual artist, the grandchild of an eminent Lebanese intellectual, reporter and literary historian Husayn Muruwwa (1910−1987), the first to interpret the canonised Arabian literary classics through Marxism. In his work he deals with the relations between historical representations that enter the general public as universal, and presences, obvious gaps, holes and inconsistencies that remain excluded from the official historical narratives, because their contradictions would weaken the elected political powers. Mroué belongs to a generation of artists whose childhood was marked by the Lebanese civil war. He dedicated his works to the military conflicts in Lebanon and the broader region, with which he has made a name for himself at home as well as abroad. In these works the historiographic composition is constantly disassembled to a level, on which its utilitarian and propaganda production becomes obvious, and the author enlightens it with a personal view with which he proves that the official history is fake. So far his works have been presented in Slovenia at the festival of contemporary performing arts Exodos (the performance Looking for a Missing Employee, 2005), in the programmes of Maska (the exhibition ‘2023’ in the Modern Gallery, 2006, the lecture Theatre with Dirty Feet and the performance The Inhabitants of Images, 2011) and at the extensive exhibition which the curator Alenka Gregorič dedicated to him in the Town Gallery in Ljubljana in 2014. Rabih Mroué is undoubtedly one of the most exciting contemporary artists of this moment.

At the beginning of the performance Elephant (2018), which premiered this year in the Berlin theatre HAU, the choreographer uses a series of sketches of anonymous corpses as a choreographic partiture or a sort of compositional frame. The choreography reveals itself as a crime story in which the choreographic catalogue of deductions appears on stage. With the audience’s imagination the empty stage is transformed into an urban war polygon, in which the dancers are training for various survival strategies. In this performance one of the basic questions is connected to space: where is the invisible choreographer hiding?

Dance collective DANCE ON ENSEMBLE demonstrates with their activity what art dance practices have to gain from experienced dancers. Collective members are renowned dancers that have performed in the best world contemporary dance and ballet ensembles who feel that their dance careers should not end when they turn 40. Their dance and bodily knowledge had been mastered through years of work with the best choreographers, reflected dealing with own body, and accumulation of experiential and mental processes, realizations, and knowledge in the areas od choreographic, dance, and somatic practices. The establishment of dance collective DANCE ON Ensemble wants to affirm a different view on the dancing body and its time in the context of contemporary cultural production.