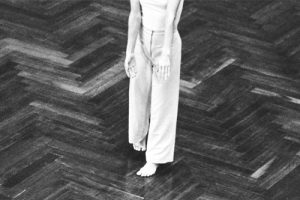 The second evening will present three dance solos that were created between 1963 and 1965, in the period during which Lucinda Childs worked with the Judson Dance Theatre collective or in the artistic circle that emerged from this collective. During this period the JDT collective experimented with various means, which were aimed at creating holes in the serious, narrative, expressional and pathetic walls in American modern dance. In order to achieve this they used found and purchased objects, speech and sounds as well as placing various bric-a-brac into the space. They avoided theatres and preferred to perform in so-called ‘alternative spaces’, however their ‘dances’, as they called their choreographic works, were not to be accompanied by anything that would even remotely resemble music. The three solos presented during the second evening are discretely ironic, comical in places, with apparent seriousness and rebellious gestures with which they endeavour to chip away at the aesthetic canons of modernism. The dance solo Pastime (1963) is the first dance work that Childs presented within the frame of the JDT collective; this was at their fourth evening, on 30th January 1963 in the sports hall of the Judson Memorial church in Washington Square. In this solo the lead role is taken over by a heroized leg of a dancer that we observe in great detail from three situational perspectives. The legendary solo Carnation (1964) was a part of the last, sixteenth evening of JDT, which the collective performed on 29th April 1964, just before half of the collective left on a six month world tour with Merce Cunningham. For this solo Childs purchased a series of kitchen utensils from a department store and used them to transform her body into a grotesque consumer figure. The third solo Museum Piece (1965) is an appropriation of a museum tour, in which the dancer transforms Georges Seurat’s pointillistic painting entitled Circus (Le Cirque, 1890−1891) into choreographed matter. The second evening also includes two dance films: Calico Mingling was filmed in 1973 by the French film director Babette Mangolte who accompanied American post-modern dance, and who found an exceptional location for the choreography, which made it possible to film it from stunning perspectives, while the solo Katema was filmed in 1978 by Eric Franck.

‘In place of a hermeneutics we need an erotics of art,’ wrote Susan Sontag in 1964 in the last sentence to her famous essay Against Interpretation. It seems that this sentence is a very condensed way of describing the tendencies that appeared in this period in artistic practices as well as in reception aesthetics: how to make one’s way to materiality and objectivity, how to get rid of the ideological, academic, value, knowledge and referential ballast, so that we can reach the object with its own presence. The audience in the 1960s could suddenly see the bare reality, which does of course have formal connections to German (Bauhaus) and Russian constructivism, while watching films from the various new waves, while listening to aleatoric music (Boulez, Cage for instance), or enjoying visual art (minimalism, in Slovenia also deconstructivism, etc.), reading the French new novels with the descriptive style that described life in direct objectivity (Butor, Robbe-Grillet, in Slovenia Šeligo; Kermauner described these tendencies with the term reism). In Slovenia these tendencies were linked to the creativity of the circle around the group OHO, while in Belgrade Marina Abramović exhausted her body in her early performances, with which she attempted to exorcise the ideological clutter. Lucinda Childs’ choreographic opus with concrete dance poetry, which pushes dance almost to the level of sculpture is a true manifestation of these artistic tendencies.