The performance will take place every hour on the hour, between 12 am – 8 pm and half an hour prior to the performances in Kino Šiška 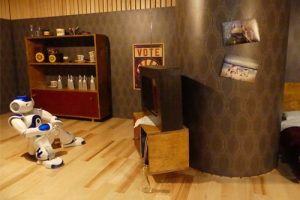 In his childhood and adolescent years, the dancer, choreographer and dance curator Dejan Srhoj was a dedicated student of ballet, and between 1998 and 2001 he was a ballet soloist in the Slovenian National Opera and Ballet in Ljubljana. His departure from the ballet ensemble, which he left together with Goran Bogdanovski, was a special cultural-production phenomenon which was often present and repeated in the inflexible ballet institutions in former Yugoslavia and Eastern Europe from the first half of the 20th century onwards. In 2001 he, together with Goran Bogdanovski, funded the non-government dance company Fičo Balet, in which they perfromed artistic and pedagogic work in the field of contemporary dance. 15 years ago he was the co-founder of the Balkan dance network Nomad Dance Academy, in which he plays an active role even today. He cooperated with numerous choreographers and directors such as Janez Janša, Ivica Buljan, Sebastjan Horvat, Betontanc, Magdalena Reiter, Silvan Omerzu and Kaja Lorenci to mention just a few.

His work is strongly infused with the policies of self-organisation and collective work, in which it is not necessary to completely consolidate the performers in order for cooperation and creativity to take place. He is interested in the compositional processes that take place in the production, curatorial, pedagogic as well as artistic, or to be more precise choreographic, fields. He calls his work composition of differences, and his chorographical piece which he started developing last year with his fellow dancers carries the same title. Choreography as a wide spread practice is also his expertise in the use of choreographic practices outside of the cultural field. Together with Nina Božič Yams he developed tools with which choreography enters the level of process optimisation in various companies and organisations in Sweden.

It was in Sweden, within the project INNODAY organised by Expectrum (a coworking space in the town of Vestras), that he cooperated with Nina Božič Yams in the development of the robot Nao, which Srhoj brought into an art project. In the installation/performance Nao the Robot, Srhoj gives the robot some sort of a contemporary romantic identity with which he repeats the gesture that Mary Shelley gave to Frankenstein in fantasy literature, with the only difference being that this time the action is performed with a touch of irony and a humorous twist. We encounter Robot Nao in a contemporary everyday environment, in which he is our host who shares his woes and joys with us, just as a friend or neighbour would. Srhoj is interested in the hypothetical twist in which technophobia is made profane and the robot obtains human subjectivity, including any bizarre traits that come along with it. Through this Robot Nao’s narration twists in a mild and comical pirouette.